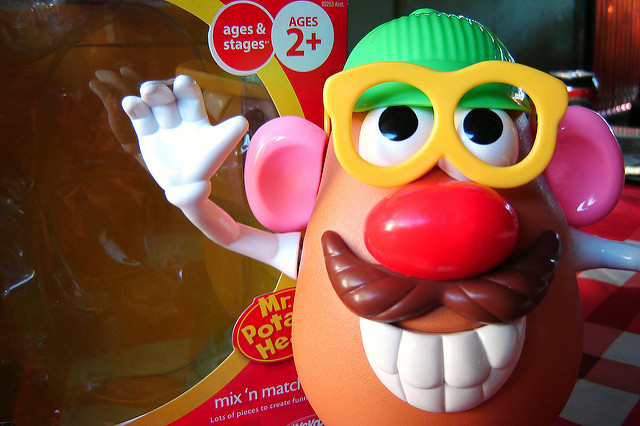 Over on Forbes, Kim Elsesser reports on a new effort by the White House to tackle gender stereo-typing in the media and in toys. She highlights that as long as the media and toys constantly tell girls to focus on their appearance first, their broader competence will suffer. Elsesser notes the difference between playing with Barbie and playing with Mr. Potato Head:

In one of my favorite studies, 4- to 7-year-old girls were randomly assigned to play with either a Barbie doll or a Potato Head toy for five minutes. It’s hard to believe such short exposure to any toy could have an impact on a child, but after playing with the assigned toy, the children were asked about their career aspirations. Playing with Barbie (for only five minutes!) actually limited the careers that these girls felt they could attain. Playing with the Potato Head had no such effect. So, toys and media are clearly important when it comes to career.

The study concludes that the Barbie, being fashion focused and sexualised, guides girls to focus on their appearance. Elesser comments, “Study after study shows that when women evaluate themselves based on their appearance there are negative consequences. Women who do this perceive themselves as less competent and even perform worse on objective tests.”

Here at Kids Future Press, where our new book features a mother who is an inventor and a daughter who is a great skateboarder, we feel that the stories children read can also contribute by portraying women and girls in STEM and other roles that don’t focus on a female appearance.